Hertha Berlin secured a narrow win over Borussia Dortmund in a tight Bundesliga affair as Marvin Plattenhardt proved the difference.

Hertha Berlin blew the race for Champions League qualification from the Bundesliga open as Marvin Plattenhardt’s stunning free-kick earned them a 2-1 victory over Borussia Dortmund on Saturday.

Dortmund had been in fine form coming into this clash, but their momentum was halted at the Olympiastadion by Hertha, who are now just three points behind Thomas Tuchel’s third-placed side in fifth.

Although Dortmund started brightly, buoyed by a fine week in which they thrashed Bayer Leverkusen 6-2 and reached the Champions League quarter-finals, Salomon Kalou netted as Hertha profited from a Matthias Ginter error.

Hertha have the best home record in the Bundesliga, but they could not stop Pierre-Emerick Aubameyang scoring his eighth goal in four games in all competitions to equalise in the 55th minute

Dortmund continued to press, hoping for a winner, but more sloppiness from Ginter proved costly as his foul on Mitchell Weiser allowed Plattenhardt the chance to drill a fine set-piece beyond Roman Burki.

Although the visitors threw on Ousmane Dembele and Christian Pulisic, Hertha were able to hold on and close the gap to the top four. 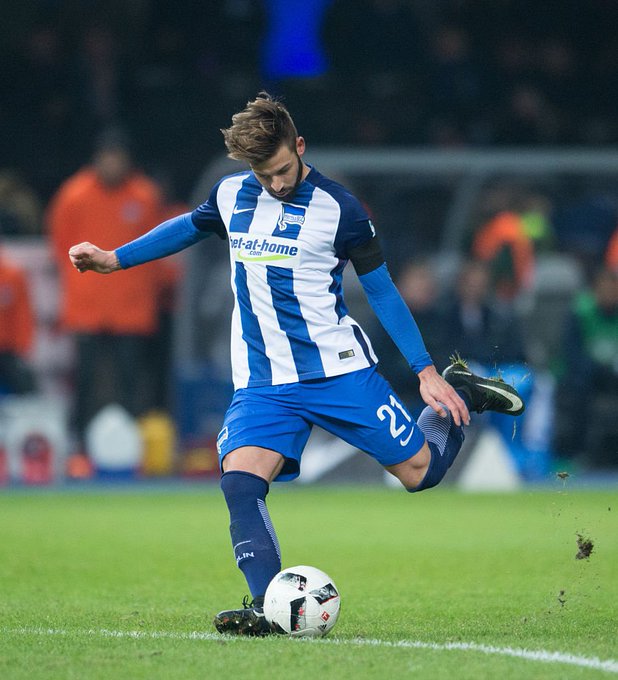 Dortmund should have been in front within two minutes, but Andre Schurrle, played in by Shinji Kagawa, inexplicably shot high and wide as he bore down on goal.

Ginter nodded a second early chance over the crossbar and was later caught in possession in his own half, allowing Vedad Ibisevic to tear clear on the right, brush off the recovering defender’s challenge and centre for Kalou to tap into an open goal in the 11th minute.

Kalou immediately sought a second, forcing a fine save from Burki and then seeing his low shot from the subsequent corner cleared off the line by Raphael Guerreiro.

Dortmund took their time to muster a response, with Marc Bartra flicking Ginter’s cross over as Hertha failed to remove the danger after a corner from the right.

Threatening deliveries at either end, from Plattenhardt and Erik Durm respectively, then saw Kalou and Aubameyang fail in their efforts to steer the ball home.

But Hertha should have doubled their lead shortly after half-time when Kalou dummied Peter Pekarik’s pass to create an opening for Per Ciljan Skjelbred, who screwed his shot wide.

Kalou continued to wreak havoc from the left for the home side, but Dortmund’s own danger man levelled the scores with his first and only shot on target.

Kagawa prodded a pass into the path of Aubameyang on the left-hand side of the area and he finished sublimely into the top-right corner.

That goal appeared to turn the game in Dortmund’s favour and Gonzalo Castro dragged wide after bursting through the hosts’ back-line, before Aubameyang lifted an effort past the post as the ball fell his way in the area.

But the visitors were made to pay for their profligacy when Ginter’s foul gave Plattenhardt a 71st-minute free-kick 20 yards from goal, and he planted an explosive strike into the top-right corner.

Dortmund tried to salvage a point, but Schurrle’s wide drive was the closest they came as Hertha clung on for the points.

Key Opta stats:
– Dortmund lost their ninth Bundesliga game under Thomas Tuchel – all nine of them in away games.
– BVB have already lost one game more this BL season (five) than they did in all of 2015-16 (four) and have 14 points less (43) than they had after 24 matchdays of last season (57).
– Pierre-Emerick Aubameyang has scored eight goals in his last four games in all competitions, after going scoreless in his previous four games.
– Aubameyang’s 12th away goal this league season ties a club record for a Borussia Dortmund player in the Bundesliga (with Lucas Barrios in 2009-10).
– Just like last season, Aubameyang has 22 goals after 24 matchdays. His arch rival Robert Lewandowski has 21 now, 23 then.